An Intuitive Guide To Coffee Solubles, Extraction And TDS 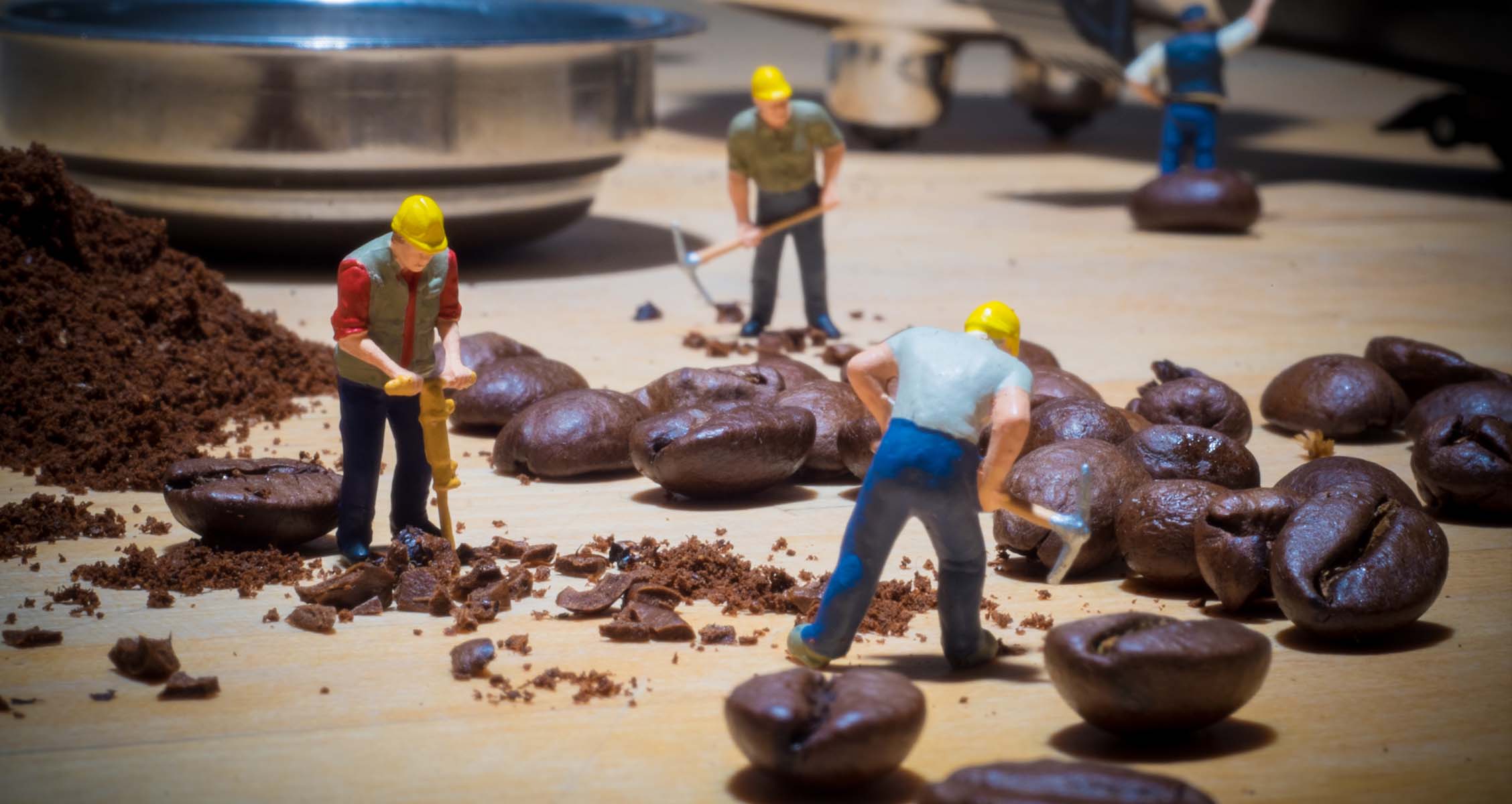 How Does Coffee Get Out Of The Bean?

Humanity has been trying to solve this problem every morning for a thousand years.

Nature imprisons thousands of tasty solubles inside of coffee beans, and we want them in our cup.

Over time we've learned that pouring hot water onto coffee grounds turns the water into coffee.

Sometimes it tastes good, and sometimes it is not so good. Why is that?

We will attempt to answer that question by zooming down to the microscopic level inside of a coffee bean and looking to see what happens when coffee grounds and water meet.

When we look at coffee from the cellular level, it is easy to understand how the ratio of water to coffee, time and grind size impact the brewing process. This will help us build a intuitive sense for thinking about concepts like Extraction and Total Dissolved Solids (TDS).

There is no need to fear these abstract concepts or expect a story filled with mundane technical details. The story we discover is one of an epic prison break where millions of good guys find freedom and the bad guys are left behind bars. And as you might expect, there is a superhero that saves the day.

A Look Inside The Bean

Our journey starts with a single arabica coffee bean. If we were to think of this coffee bean as a prison, it would have over 4,500,000 cells! Now imagine cutting a horizontal slice right through the middle of the bean in the image above.

This view is looking down at the cross section of a roasted coffee bean that has been cut in half. Notice all of the tiny holes in the bean. Each one of those holes used to be a living cell when the coffee bean was growing inside of a cherry on a coffee tree.

This view has been magnified 750X with an electron microscope so we can easily see each individual cell. The width of one of these cells is about half the thickness of one of the hairs on your head. (50 - 70 microns)

When the coffee bean is roasted, the cells fill with CO2 gas and expand. Trapped within the walls of each cell are solubles that we want to release into our coffee.

"Solubles" is the overarching term that is used for the substances in a coffee bean that can be dissolved by water. At the most basic level, brewing coffee is using water as a solvent to dissolve the solubles that are locked in the cells of a coffee bean.

Solubles come in many different shapes and sizes. The image above describes the four main categories found in coffee beans and the unique flavor notes each one contributes to the taste of coffee.

Fruit acids and caffeine are the easiest to dissolve and are responsible for light and fruity flavor notes.

Lipids are the natural fats and oils found in coffee beans. They aren't technically soluble in water but water can still release them from the coffee cell as an emulsion.

Brewing methods that use metal filters like French Press and espresso allow lipids to pass through into the cup, producing the mouthfeel those methods are known for.

The pores in paper filters are so small that they prevent most lipids from passing through. Drip brewing methods like pour over will only contain 1/10th the lipid content compared methods that use a metal filter.

When coffee is roasted, the Malliard reaction produces melanoidins that are responsible for the browning color of coffee, both in bean and liquid form.

Carbohydrates make up 50% of a dry coffee beans total mass yet only some of the carbohydrates are soluble. Their main role is to add sweetness and earthy flavors.

As the coffee cherry develops on the tree, Mother Nature locks these innocent solubles inside the cells of each coffee bean.

We're back inside the coffee bean and it's not looking good for the solubles. After the bean has developed, been picked, processed and roasted the solubles are locked up inside of dark cells. At least it probably smells good inside.

*Note, the colored balls are used as a representation of the solubles and are not drawn to scale.

Water is here to save the day! When water enters the coffee cells it begins dissolving the solubles. This new solution of solubles dissolved in water is known as coffee.

Not all solubles are created equal

When we look at the total mass of a coffee bean, only 30% of it consists of solubles. The other 70% of the bean is made of insoluble fibers and carbohydrates that create the beans structure.

About 20% of the bean contains good solubles and the other 10% are bad and taste awful. To brew the best cup of coffee we have to try and release the good solubles while leaving the bad ones locked up in the cells.

Luckily the bad solubles move slower and take longer to dissolve than the good solubles so we can coordinate the jailbreak by limiting amount of time water has to work.

The longer water is in a cell, the more solubles are extracted

In the coffee world, extraction rate is the term used to quantify how many of the solubles should remain locked up in the Coffea Arabica Prision cell and how many we want to free.

The longer that water is in a cell, the more solubles are able to be dissolved.

The optimal guidelines set by the SCAA for extraction are 18 - 22%. So this means that when we take the total weight of our coffee beans, 18-22% of that mass will be dissolved by water and end up in our cup.

Water can only extract solubles from cells it can touch

Now that we know how water interacts with each cell individually we can look at how it will interact with the entire bean. To simplify, we are going to look at the cells as if they were in a 2D or flat environment. In reality the bean is a 3D structure but the concepts transfer easily.

In the image above imagine that the entire bean was placed into water. The water would only be able to access the cells on the outer surface of the bean, represented by the blue highlight.

Our goal is to free the solubles throughout the entire bean so we need to find a way for the water to access the inner cells.

Water travels deeper into each coffee particle over time

After 120 seconds the water has made it through 15 cells. If you were to stop the brewing process at this point the solubles that are in cells at the center of the coffee ground would still be trapped there. This would be considered an under extracted coffee ground.

After 240 seconds water has worked its way into all of the cells and the coffee particle is fully extracted.

Now consider what happens when we change the grind size. The time scales of 30, 120 and 240 seconds are the same, and the total number of cells is the same.

Yet it is now possible to fully extract the same number of cells in 30 seconds as 240 seconds.

Grind size doesn't determine what is being extracted, it determines how long it will take for the water to reach all of the cells.

Hopefully it is starting to become clear how time and grind size are inversely linked. When we increase one, we must decrease the other.

Extraction is a balance between grind size and time

What if we use different grind sizes but keep a time of 120 seconds for all sizes?

Recall from earlier that it is possible to over extract a cell and release some of the bad solubles if water is left in contact with it for too long. The orange cells in the box on the left represent cells that were over extracted.

The middle represents our optimum extraction of 20%. The time and grind size are in the right balance where water has just enough time to dissolve the good solubles and leave the bad ones locked up.

There wasn't enough time for water to access all of the cells for the box on the right so both of the good and bad solubles remained locked inside the center of the coffee ground.

We can now see why it is important to have a consistent particle size when we grind coffee beans into smaller pieces. If the grind is inconsistent it will cause some of the grounds to be over extracted while others are under extracted.

Strength is the ratio of solubles to water in your cup

Until this point everything has been about extraction, the balance of good and bad solubles that are released from each cell. Now lets look at strength, also known as Total Dissolved Solids (TDS).

TDS can be simply defined as the ratio of solubles to water in a cup. This is largely a matter of personal preference but it is generally considered that 1.15% to 1.35% is an optimal ratio.

This means that for every 1 soluble we have 99 parts water.

The solubles released during extraction determine the flavor and TDS determines the intensity of those flavors. This is similar to music if you think of solubles as the music itself and TDS is how loud the volume is set.

Increasing TDS will produce a stronger flavor but turning it up too high may cause some flavors to over power others completely.

Extraction and TDS are the two ratios that define coffee brewing. Hopefully this story has helped develop an intuitive understanding of what is happening when coffee grounds steep in water and why small changes in the ratios can lead to big differences in flavor.

You now have the tools to dial in your brewing recipe and get the best flavor out of our coffee beans. The only thing left to do is to start experimenting and free some solubles!