The Ultimate Brew Down: Aeropress vs. French Press 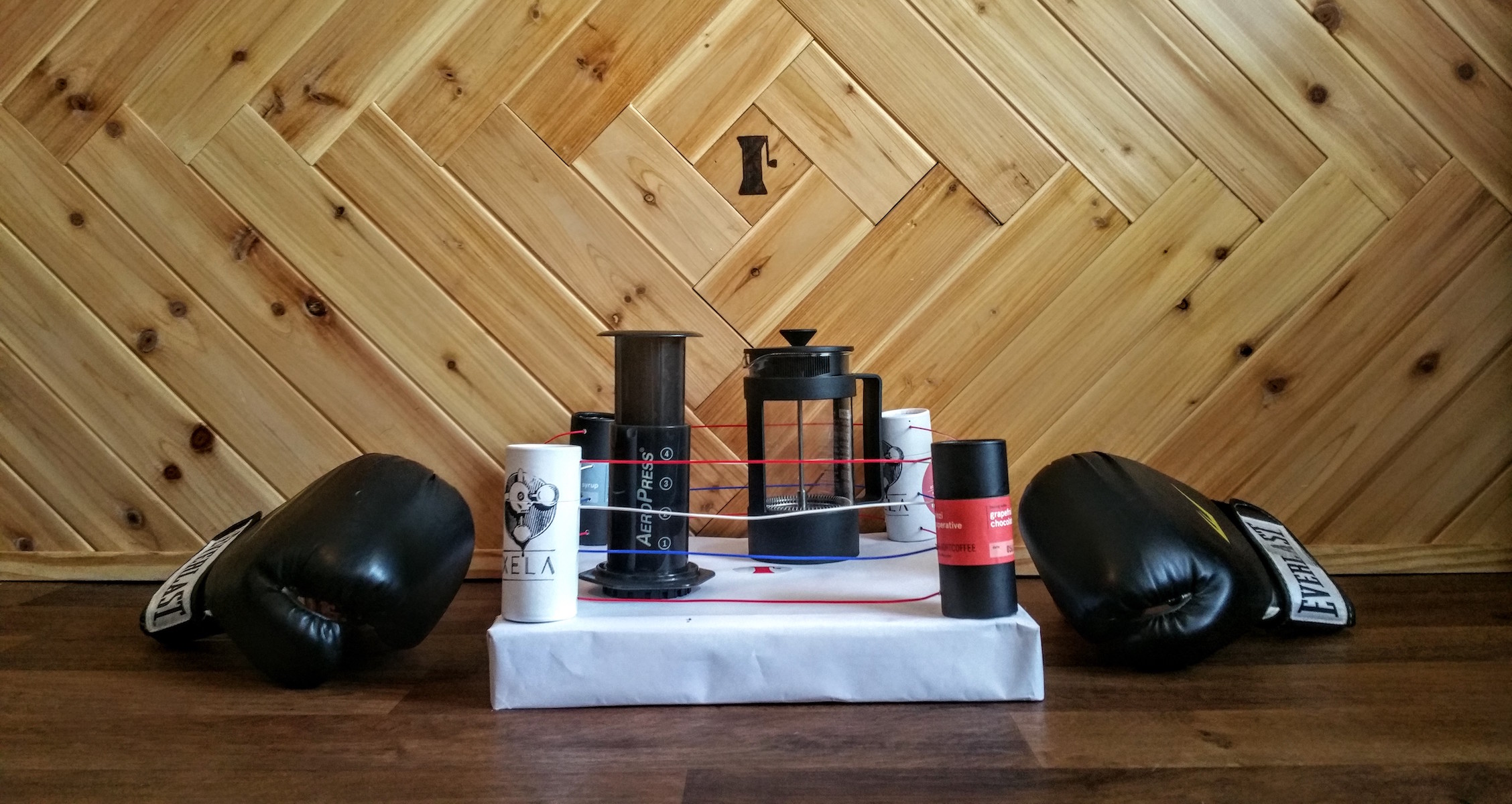 We welcome you to the featured bout of the morning, between two iconic brewing devices that are used by millions of coffee drinkers around the world.

In one corner is the French Press, fighting out of Milan, Italy, stands 7.5 inches tall and weighs in at 17 ounces. The French Press is a veteran in the coffee industry with a career that has spanned more than 80 years. To this day, the French Press holds the belt as the reigning champion and the most popular manual brewing device in the world.

The challenger is the Aeropress, fighting out of Palo Alto, California, stands 5.5 inches tall and weighs in at 6.3 ounces. The Aeropress is a relative newcomer to the coffee scene just celebrating its 10th birthday in 2015. In that short time it has attracted a fanatical following and its own international circuit of brewing competitions.

The Aeropress and French Press are going head-to-head in the Ultimate Brew Down. We will first take a closer look at each brewing device and then call in the Team Handground coffee community to compare their strengths and weaknesses. Over 70 coffee enthusiasts provided their knowledge and insight, so this is bound to be a close match.

Let’s get ready to rumble!

What is the Aeropress?

The Aeropress is a piston-style brewer that forces coffee through a thin paper filter directly into a cup. It brews just a single serving of coffee at a time, but its size and durability make it a favorite device among travelers and campers. Aeropress coffee has a clean taste with clearly defined flavor notes thanks to the paper filter that stops any oil and sediment from getting in the cup.

Using the "Standard Method" for Aeropress

The Aeropress is unique because there are two distinct ways of brewing coffee with it. The original, intended style is now called “standard” method. It involves placing the Aeropress on top of a cup, filling it with water and coffee, inserting the syringe-like plunger and pressing. The other method, called “inverted”, was discovered by members of the coffee community. It starts with the Aeropress standing upside down on top of the plunger, filled with coffee and water, then flipped onto the cup to be pressed.

Using the "Inverted Method" for the Aeropress

The Aeropress’s versatility gives it a major advantage in the ring. People have created hundreds of recipes by adjusting variables like grind size and brew time, resulting in a wide range of unique cups. The Aeropress can even make coffee concentrate similar in taste to espresso. It is the perfect brewing device for curious coffee drinkers and experimenters.

What is the French Press?

The French Press is comprised of a tall carafe and a metal mesh filter attached to a long stem. Coffee grounds are steeped in hot water for several minutes and then pressed to the bottom of the carafe by the metal mesh filter. The result is a heavy-hitting cup of coffee with robust taste and mouthfeel.

The typical French Press recipe calls for a coarse grind so that grounds do not pass through the porous metal filter into the cup. Because coarse ground coffee has less surface area exposed to the hot water, the French Press requires a longer brew time in order to reach the desired extraction. This makes the French Press extremely low maintenance because it can be left unattended for 3-5 minutes while the coffee steeps.

Due to the metal filter, fine sediment and oil pass through the French Press filter, leaving a lot of sediment in the cup. Many coffee drinkers love the unique mouthfeel of French Press coffee, but others prefer the cleaner cups created brew methods that use a paper filter.

A Good Grind is The Key To Better Coffee

Brewing great coffee demands a consistent grind, no matter which brewing method you use. Handground was created by a community of thousands of coffee enthusiasts to make it easy to achieve a consistent grind for any brew method.

In one way the Aeropress and French Press are very similar. They are both considered “full-immersion” brewers, meaning the coffee grounds sit in the hot water to steep before being separated. This is different than a pour over device where water is poured onto the coffee grounds and immediately flows down through a filter into the cup. Because of this, the Aeropress and French Press both create thick, flavorful cups of coffee.

We sent a survey to Team Handground to learn what they liked and disliked most about the Aeropress and French Press. These coffee enthusiasts have years of collective experience with coffee and intimate knowledge of the two brewing devices. Almost 70 coffee enthusiasts and professionals weighed in on the topic, and we have shared their comments below.

Aeropress: Why People Love It

“Super reliable, but so flexible. Meaning, it's so easy to repeat a brew again and again, but there are so many different ways to use the Aeropress.”

“Because it's one of the most versatile brew methods, it allows you to prepare as many recipes as you can imagine.”

“It's also endlessly adjustable to whatever style of brew you want to do. If I want an espresso-like cup, this is my only choice.”

“You'll rarely find a cleaner or more defined cup of coffee than from an Aeropress.”

“It gives a great balance of body and clarity. Sometimes pour overs tend to be too clean, but Aeropress brings out more body while it keeps the cup from being over-the-top muddy.”
-Justin Carpenter, Foolish Things Coffee Company, Tulsa, OK, USA

“Makes a nice strong cup with more flavor clarity than a French Press.”

“This makes the most flavorful cup of coffee in my opinion, and when using the stainless steel mesh filter, the oils from the beans are able to make it into your cup. Also, the pressure generated during the pressing step seems to extract more flavor from the coffee grounds.”

“It's basically indestructible, it's super cheap, it's majorly portable, it's crazy versatile, and it make the perfect amount of coffee.”

“It's really great to travel with and I once made it on an airplane. It's also the smoothest brew method I've come across.”

5. It is a single serve brewer

“I like that it only makes about 6 ounces of coffee because it makes you really appreciate every drop.”

“It's also super easy to clean and carry, making it ideal for travel and workplace coffee.”

“Depending on the method you use, it can involve flipping the AeroPress. That could cause burns or a mess.”

“If you have ever knocked over an inverted Aeropress and burned yourself then congratulations you are a real coffee head.”

2. It is physically challenging

“If you have shoulder issues, sometimes pressing the plunger down may be troublesome.”

3. It is less forgiving than French Press

“It is complex to define the best brew time. Its really different depending on roast degree, kind of coffee, cup profile.”

“The most technical in getting a good extraction. Feels very complicated.”

4. It is bad for multiple cups

“If you're making coffee for a group, game over.”

“You really can't make more than one good cup. I've tried two-cup recipes and have never been satisfied. This is a single serve device.”


French Press: Why People Love It

“French Press is a much simpler method that is great for getting a good cup of coffee when you may not have a lot of time in the morning, but still want something fresh brewed. It is also much easier to learn as the balance isn't as tight and one can easily make multiple cups to have coffee available throughout the morning.”

“I choose French Press when I want a bolder, thicker cup of coffee.”

“Sometimes I want a heavier cup or the coffee might need more body to it. For whatever reason I really love them when it's overcast and just a bit chilly.”

“Full body and a 'set it and forget it’ for 4 minutes mentality :)”

“The only time I choose French Press is when I am very tired and want to be lazy for my first coffee in the morning as you can set it up and then leave it to brew.”

“It's a little easier and doesn't require quite as much prep. I have one I keep at work at my desk so I can have a solid cup of joe on the go.”

“[I use French Press] if I need to brew manually for a larger group and need to multitask.”

“I also choose French Press when I want to brew a couple of cups at a time.”

“It's super easy, it's wicked consistent, and it's nice and full bodied.”

“Reliable, time after time. And easy: It’s really unnecessary to weigh the water because it's so easy to repeat and small variable changes don't throw a French Press off.”

“French Press has fewer variables (less to go wrong or lead to inconsistencies) and offers the purest flavor because there is no filter to absorb oils, etc.”


Get A French Press

“The coffee is a little more oily, in my opinion. It isn't necessarily a bad thing, but the flavors are not as distinguishable as they are in other brew methods.”

“The oils of a press pot, although bodiful, blurs the tastes of the origins of a coffee in my opinion. You can't fully appreciate the flavors the same way you can in a V60.”

“It doesn't work with every coffee. Some work great but some don't taste great. Personally I can drink an African coffee on the French Press but not an Indonesian one. The African coffee is brighter and and the citrus really stands out while Indonesian coffee usually tastes dirty to me.”

2. It is less healthy

“It is said that the terpenes in the oils raise your cholesterol. So, that was the excuse I needed not to use it.”

3. It has a heavy mouthfeel

“The only con to the French Press is the residue left in your coffee cup. A small price to pay for an excellent cup of coffee.”

“If I make a French press, I filter it through a brew cone anyway, so what's the point? Coffee should be sipped not chewed.”

“It's a great method, but tends to make a cup with a particularly heavy mouthfeel. Not my preference.”

4. It is harder to clean Up

“I hate cleaning coffee out of press pots - one of the main reasons I don't use them more often.”

“Clean up can be a little more intensive than a pour over.”

“Cleaning/care of equipment. In restaurant settings the carafes are often mishandled and get broken.”

The Aeropress and French Press brought their best in this battle of brew methods and it's time for the decision.

The truth is, we can not declare a winner. The decision comes down to the coffee drinker, whose taste preferences and personality will determine which brew method is best.

The Aeropress is great for people who like experimenting with different brewing recipes, who enjoy making a single cup at a time, and who want to take their coffee brewer anywhere they go.

The French Press is best for people who love rich, bold cups of coffee, who make more than one cup at a time, and who have the “set it and forget it” mentality to making coffee.

So why choose one brewing device when you can have both? At only $30 each, it’s not out of the question to own both an Aeropress and a French Press. With such different benefits and flavor profiles, they are both worthy competitors to have in your corner.

No matter which brew method your choose, remember that great coffee starts with a consistent grind.

Click here to learn more about the Handground coffee grinder.