Engineering Updates and Handground at SCAA in Seattle 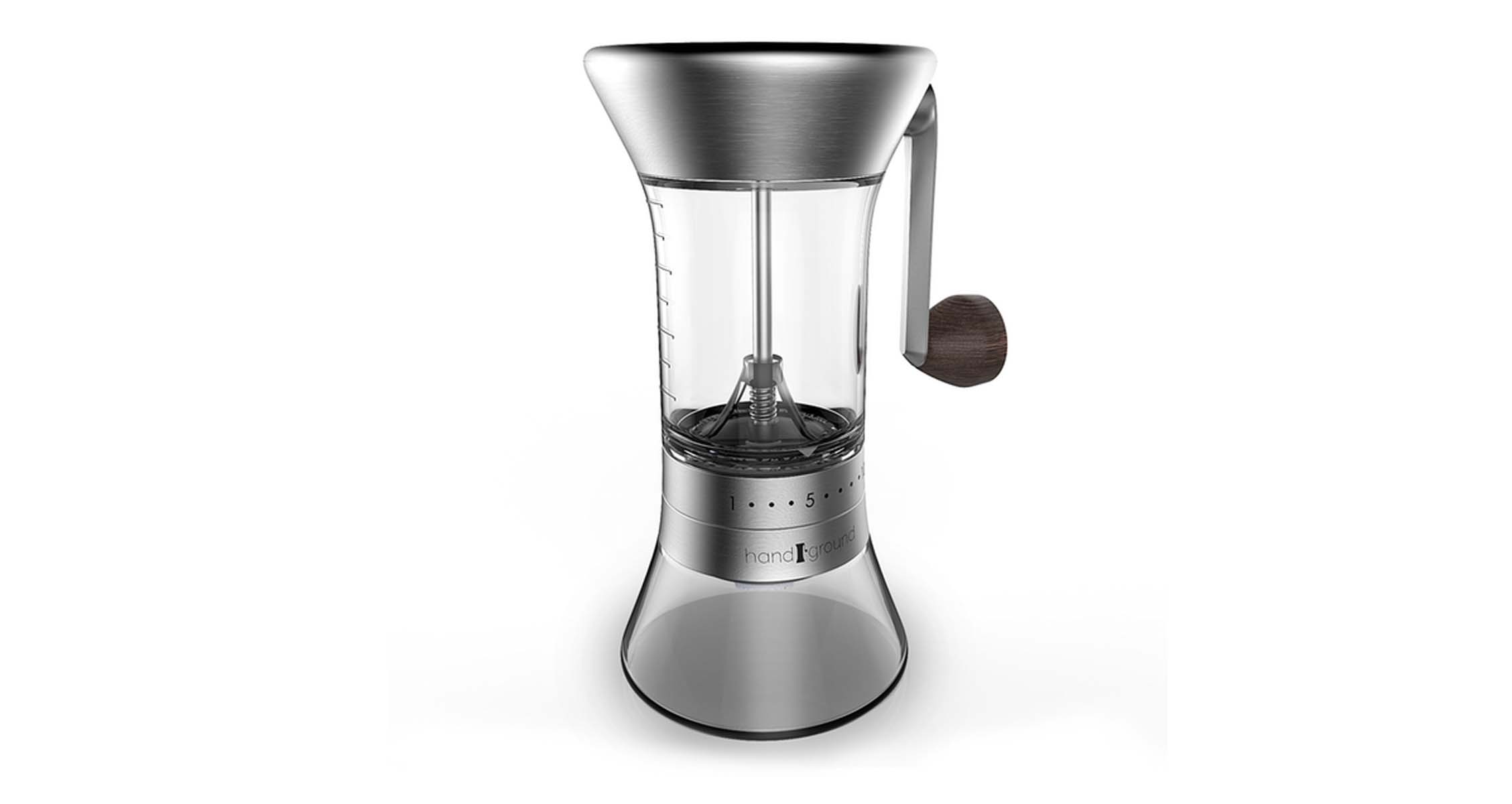 Over the last few weeks we have been working with the Platform88 engineering team to make some final improvements to Handground and prepare it for manufacturing. In the photo below we go over four improvements in the latest design.

We moved one of the axle supports from the "yellow" ring on the left to the "clear" hopper on the right. We found in our initial testing that beans could stack in the hopper in a way that would prevent them from feeding down into the burr mill. The placement of the arms in the new version will keep the beans feeding smoothly.

2. Spring is contained and disassembly to clean burr is easier

On the old design we were concerned that small grind particles may work their way in between the "clear" and "blue" piece and deposit on the "yellow" step over time. The blue piece moves up and down depending on the coarseness level, so the gap created there could trap particles.

We solved this problem by extending the "clear" hopper down over the "blue" piece. This will prevent particles from finding their way in between these pieces.

The burr mill now sits a few millimeters lower than the old version. The concern here is that you may see a portion of the burr mill through the glass catcher if you are looking at the grinder from a side profile. We are working with our engineering team to move it back up to its previous position.

The rendering above reflects the new version that we discussed in the earlier points. It also includes a concept of two new ideas that have been proposed by Team Handground in the past few weeks. (#1 & #3 below)

1. Measurement markings on the hopper

On the left side of the hopper is a concept for "tick marks" that could act as a method of measuring the amount of beans you need. We realize that using a scale is the most accurate method of measuring the amount of coffee needed but this could provide a close estimate for people who haven't invested in a scale. The tick marks would represent grams in approximately 10g intervals.

The visible change from the "old version" to the "new version" is the axle support that rises up in the center of the hopper. We are considering adding a cover over the spring if we find that particles get trapped in the coils. Something to keep in mind is that the supports will be hidden when the hopper is filled with beans.

On the Handground tour there was a lot of debate on "dots" vs "numbers" for the coarseness adjustment ring. This is a concept Joaquin designed that shows a hybrid of dots and numbers.

These are not finalized changes and there will be a survey going to Team Handground with additional renderings to make a final decision on points #1 and #3. Platform88 (P88) is producing a prototype in Shanghai to test the functionality of the new design.

The prototype should be ready within two weeks, just in time for the Hong Kong housewares show and the Canton fair. P88 has a booth at both of these events and we are excited that they have invited Handground to be a part of it! Brandon and I will meet the P88 team in Hong Kong to review the new prototype and represent Handground at the trade shows.

In a survey to Team Handground we learned that it would be a big improvement if the bamboo filter rack could dispense Aeropress filters. We accomplished this by adding a horizontal slot and it has worked great in our testing so far. The only further change we want to make is to increase the height of the slot by 50% so it can hold ~30 filters.

We are also looking for the right location to laser engrave the handground logo on the filter rack. We will look to Team Handground for help in deciding the final location.

Since Brandon and I volunteered at the US Coffee Championships in Long Beach earlier this year, we were invited to come to the SCAA event that starts today. As I am writing this post, we are on the way to the airport and will arrive in Seattle later today.