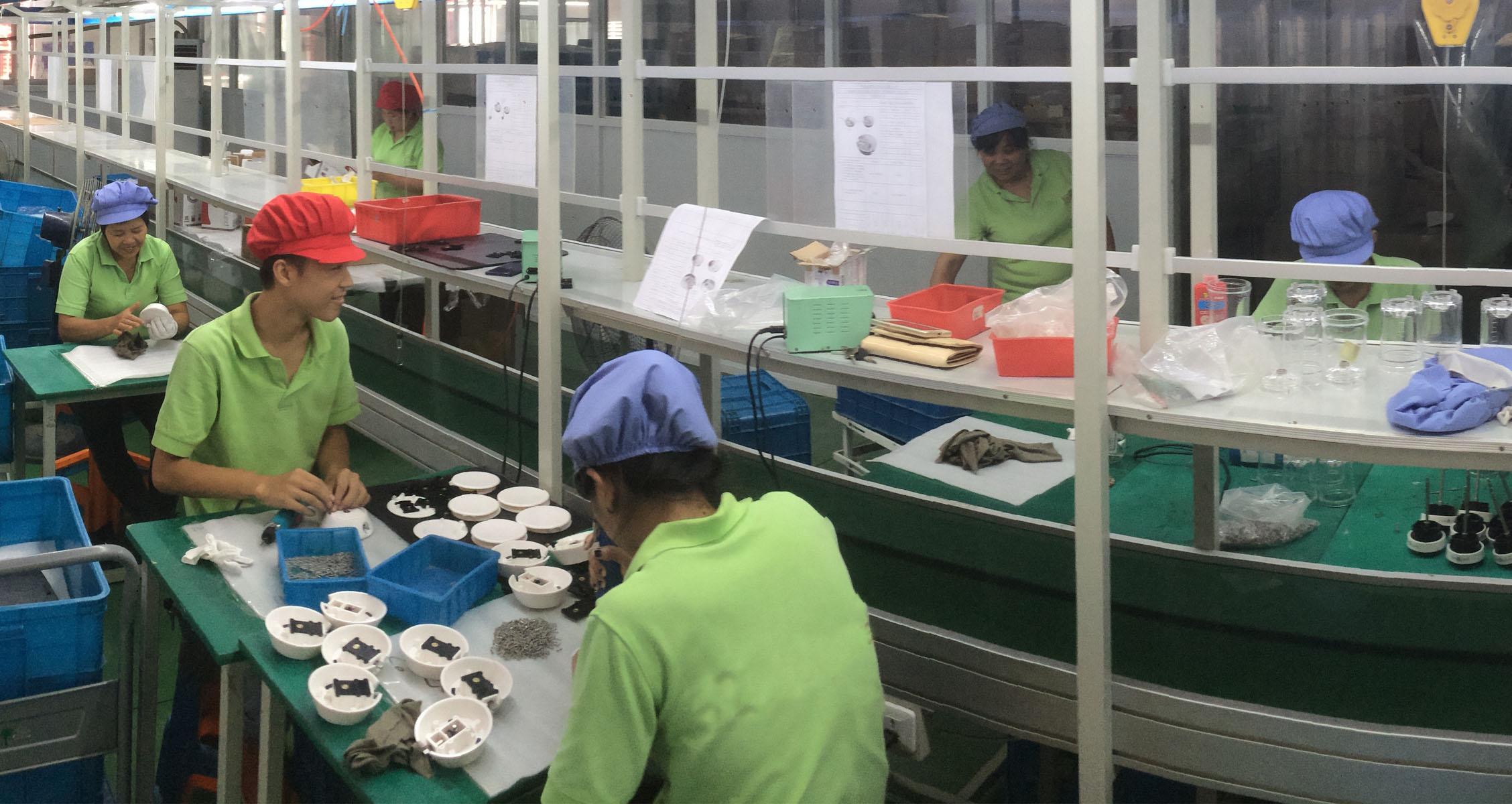 Today was the first day of full assembly! We have been at the assembly factory in China working with the manufacturing team for one week now getting the production line is set up in a new larger assembly room with a moving assembly belt that runs the length of the room. This will increase the number of units we can assemble each day.

The assembly process requires over 100 individual steps and requires a lot of attention to detail. When everything is done right the grinders are coming out great! It is really good that we are here to help the factory team get the small details right and ensure the quality control of Handground.

Last week we did a test run in the new assembly room with all the components that were updated after the first pilot run. These changes have fixed all the problems we encountered in the first pilot run. We are very happy with the results and are excited to keep everything moving along so that we can ship grinders in November. Below is an overview of the problems that have been fixed since the pilot run earlier this year.

Hopper bushings are straight: The factory designed a new machine to press the bushings into the hopper. They are now being pressed level to 0.1 degrees which keeps the tip of the axle within a 0.2mm tolerance. After the bushing is pressed in the hopper is immediately fit into a jig and an axle is inserted through the bushing so that it is held straight as it cools.

New steel axle supplier: Our initial supplier for the pilot run had trouble maintaining the tight tolerances we have set for the axles. We decided to begin working with a new metal company that makes high-precision metal components for some really big-name companies. The new supplier is doing an incredible job staying within our very tight tolerances.

With the previous supplier, we were seeing variances up to 0.7mm. This may not seem like much, but each step of coarseness setting on Handground is 0.165mm. A 0.7mm variance would make the base calibration for the coarseness settings vary by up to 4 steps i.e. setting 1.5 on one grinder and setting 3.5 on another would produce the same particle size.

The new axle supplier is maintaining tolerances within 0.1mm across 47 dimensions on the 3 axles. This increased precision has doubled the cost to produce the axles but the tight tolerances provide the consistency in grind we have sought to achieve. We plan to visit the new axle factory this Thursday and will include photos in the next update.

Adjustment ring doesn’t get stuck on fine settings: Some units from the pilot run would get stuck on a fine setting when turning the adjustment ring from fine to coarse. This was caused by the hex tip on the long axle getting stuck in the hex hole in the top cap. The new heated press for the hopper bushing keeps the axle straight and the tight tolerances with the new axle supplier ensure the axles fit.

Adjustment ring has better “click” on coarsest settings: There should be a tactile click as the adjustment ring is turned for each of the 15 grind settings. On the coarser settings, it would become hard to feel the click between each setting. The spring we were using was a bit short to put enough pressure on the adjustment piece at the coarser settings so we increased the spring length from 12.4mm to 15.4mm to provide a solid click at each setting.

All grinders are calibrated the same: Our goal is to have each grinder calibrated so the particle size produced by a setting will be the same across all grinders. The new consistent tolerances on the new axles help achieve this and will eliminate the need for manually calibrating each grinder during assembly.

Handle does not slide off: Some of the handles would slip off of the gearbox axle if they were pulled very hard. This was caused by two problems. The first is that the set screw becomes hard to tighten at the end of its hole before it is actually pressing down tight on the axle. This was a simple fix by making a special note in the assembly procedures for the workers to apply extra force to make it tight. The second was that there was no slot on the axle for the set screw to fit into. The new axles have a slot for the set screw so it is impossible to pull the handle off.

Since the last update our production timeline and delivery dates for the US has not changed. There have been a few speed bumps and some yet to come but we are working hard to make sure the timeline does not get extended.

The ceramic factory has only delivered 500 burrs for Handground. We were expecting to have 8500 units by August 31st but there was a miscommunication with the factory. We had asked them to make sure the burrs were staying within our tight tolerances and they began making samples for us to approve once again, and then those samples got lost in the mail. It is an unfortunate circumstance but we visited their factory in person last week and had extensive conversations to work through their process, QC and come up with a production plan to deliver in batches so we can make up for lost time. More details on this are below.

There are two Chinese holidays coming up in the next 6 weeks. September 15-17th is a Chinese fall festival also known as the Moon Festival. Then October 1-7th is China National Day that celebrates the founding of China. The assembly factory will be closed on these dates.

Just two days ago Hanjin Shipping, the world's 7th largest ocean container shipping company, filed for bankruptcy. It looks like there is an attempt under way to bailout the company but already there is strain on all other shipping companies from increased flow that can cause delays and congestion.

We are fortunate to have a great manufacturing team who is working with us to overcome these problems and accomplish our goal of delivering grinders in mid November. We are increasing the production rate at the axle and ceramic factory and are planning to have the assembly factory operating on Saturdays to make up for time lost on the holidays.

As the holiday season approaches the volume of shipments moving through the customs ports, logistics companies and Amazon’s fulfillment warehouse will increase 3-4X so we have to expect the time it takes for shipments to move through these systems will increase as well.

Our plan is to assemble 4500 units over the next three weeks and ship them in a container to the US on Sept 30th, before the China National Day. This will be enough to fulfill all backer orders and pre-orders in the U.S. It is estimated that the brushed Nickel components will not be ready until Sept 21st so there is a risk we may be short on how many we can include with the first container.

We are staying in China over the next 3 weeks to keep everything running smoothly and make sure that the QC at the assembly factory stays high. It will be a very tight schedule but we will do all that we can to make it. The grinders that ship out on Sept 30th will arrive in the U.S. at the end of October and should be going out for delivery the second week of November.

Summary: the delivery timeline in the U.S. of mid November has not changed from the last update.

The first step is to inject a ceramic slurry into the mold. When the green body is removed from the mold the injection points have to be trimmed with a knife.

Size difference between green body that was just molded (on left) and burr that has been through the kiln (on right). When moisture leaves the green body the ceramic will shrink up to 10%!

After inspection the burrs are placed onto stone blocks and are ready to go into the kiln.

There are two tracks running through the kiln, the one on the left is headed in and the one on the right is coming out. It takes 3-4 days for the burrs to move from one end of the kiln to the other.

These burrs are out of the kiln and ready for QC and packaging.

All packed up and ready to be shipped to the assembly factory!

Tomorrow we are heading to visit the axle factory since it will be their first day open from being closed for the G20 summit. The goal with this visit is to have them increase their production from 300 units per day to 600 units per day so that we can make our shipping deadline by the end of the month.

We will try to post another update next week with pictures from the factory visit and updated progress on the assembly schedule.

Please comment below or email us at hello@handground.com with any questions.

Thanks for your support,