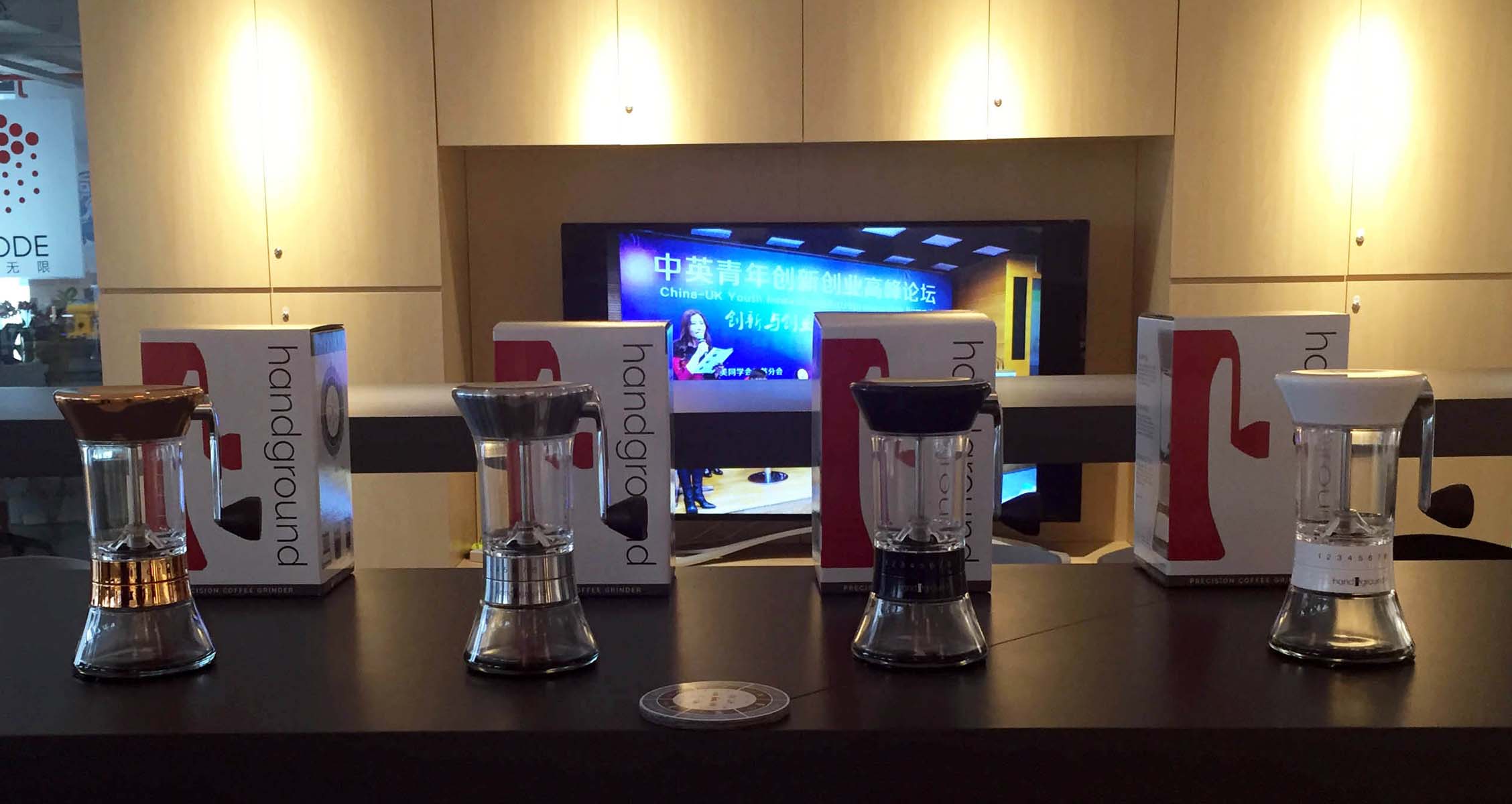 We just returned from working on the pilot production run with our team in China. We spent 10 great days at our factory improving the efficiency and quality of the assembly process.

Overall the pilot run was successful, we learned a lot and are ready to head into full production. All the details are below!

The goal of the pilot run was to establish the assembly procedures that will be used to produce Handground at scale and set quality control guidelines (QC). We chose to build 500 units for the pilot run because it would give us a large enough sample size to get a good idea for what the full production process will look like, and identify problems and error rates. There is less risk if we discover a problem making 500 units vs 10,000.

Our team in the middle is working on assembling handles, checking gearbox alignment, and pressing the self-leveling inserts into the burrs.

In the bottom right corner of this image is the press that is used to install the brass bushings into the gear box. On the same table is where the gearbox assembly and testing takes place.

Each person focuses on one job at a time, such as inserting the set screw into the gear. Then that gear is passed to someone who places it onto the axle and tightens the set screw. Breaking down the assembly process this way makes the overall process more efficient and allows for QC testing as each group of components come together.

Here are the die-cast aluminum handles with the pakka wood knob installed at the base and set screw in the top that locks the handle onto the grinder. After the wood knob is installed it is tested to see if it spins freely and aligns properly with the base of the metal handle. The handle assembly is now ready to be joined with the top cap and gearbox assembly.

We discovered that a number of the gear boxes had a rough choppy feeling, where the teeth of the gears seem to bump against one other as the handle is turned. After investigating the problem we found that the vertical gear was sitting 0.5mm (0.02 inches) too high, causing it to jam into the horizontal gear. After modifying the components to account for this, all the gear boxes turned smoothly.

This is an example of one of the components that will need a tolerance modification with the supplier before the full production run. It is also an example of why it is so important that we were there to investigate this problem in person, come to a solution, and immediately inform the supplier of the change to keep moving forward.

These inner burrs are ready to be assembled with the grinder. White self leveling inserts are fit into the top and bottom of each inner burr. On the top left of the picture is one of the assembly procedure diagrams which act as a reference for the person working this station.

Each assembly step has one of these diagrams to show the order that pieces are supposed to be assembled and supplementary information that describes the process and specific requirements. For example, the burr inserts must be fit all the way into the burr so they are level with no gaps.

At this step the stepper piece and adjustment ring are assembled and joined to the hopper. The stepper ring is turned from side to side to check that it freely rotates and has full range of motion.

The last step on this table is to insert the inner burr and tighten the thumb nut. A QC step is performed to check that the burr is seated level, meaning there is an even space between the inner and outer burr all the way around.

We observed that many burrs were not sitting level and the main axle would get stuck in the top cap when the coarseness setting was changed from fine to coarse. This led us to discover that the bushing that holds the main axle in the hopper was not perfectly level, meaning that the axle was not sitting straight up and down. This caused the burr to sit slightly unlevel and also adds friction between the axle and the 2 other bushings that hold it, causing the axle to get stuck.

The engineers at the factory built a machine that heats the bushing and then presses it into the hopper. It is a very efficient way to install the bushings but we found that the sliding jig that presses the bushing could wobble and cause the bushing to be pressed in at 1 or 2 degrees off level.

We modified the machine to eliminate the wobble and added an extra QC step where the hopper is set on a top cap jig after heat pressing and an axle is fit through the bushing and into the top cap to ensure that each bushing is mounted straight.

Once the bodies are assembled and have passed the QC checks they are placed into these bins to wait the final assembly step where they are joined to a top cap and glass catcher!

Each red arrow in the picture above points to a defect or flaw on that component. Think very tiny scratches, dings or blemishes. In a perfect world every part would come out completely flawless, but in the real world that is not possible. If you look close enough, there will always be imperfections so this process helps establish what is acceptable and what isn't.

We labeled dozens of parts as examples that the factory team can reference during QC. For example, a light short scratch that can only be seen when the light hits it at the right angle will pass but a deep scratch that can be clearly seen won't.

It is important to us that everyone involved with Handground is treated fairly and enjoys working with us.

Everyone at the factory had a smile on their face and really positive attitudes. We were really happy to see that the workers seemed to enjoy working on Handground. They are all paid proper wages, have a set lunch time every day and are out at exactly 5PM, not a second later, and never work weekends.

We are working with a reputable factory that works with other well known brands. They have undergone a Sustainability and Workplace Environment Evaluation and have a certified positive rating.

The factory itself is a clean and safe environment with proper amenities for everyone that works there. The thought even crossed our mind that we could probably live there until Handground ships.

We were able to bring nearly 100 grinders back with us to the USA in our suit cases. We plan to send one to each Handground partner coffee shop towards the end of next week so they can have it available for demo in their shop. After they are delivered we will post the list of the locations to see if there is a shop near you that you can visit to check them out.

Orders are now being placed with the component suppliers for the full production run that will fulfill all kickstarter backers orders and preorders. The lead teams to produce each component range from 2-4 weeks. We already have all the inventory made for some components, like the glass catchers.

Full production/assembly should begin at the end of July and will take approximately one month so that puts ocean shipping at the end of August and deliveries starting in September.

The copper samples are in and they look great!

We were also able to improve the nickel brushing process by changing the material that the brushing is done with. The new material produces more consistent lines that aren't quite as deep, resulting in a more matte stainless steel finish compared to the previously chrome-like finish.

Our manufacturing partner, Platform88, put together a launch event for us at their coworking space in Shanghai on the weekend. There was great turnout and we met lots of local coffee enthusiasts and some of Shanghai's great coffee shops like MQ Coffee.

It was a good opportunity to test out the grinders from the pilot run and brew some hand-ground coffee!

We intended to write this update while in China but we were literally in the factory from morning to night and thought our time would be better spent focusing on problems while we were on the ground there.

It really is amazing how much faster we can diagnose and solve problems when we are there in person so at least one of us will likely go back next month for the production run.

Thank you for sticking with us and your continuous support. Please send any questions to hello@handground.com