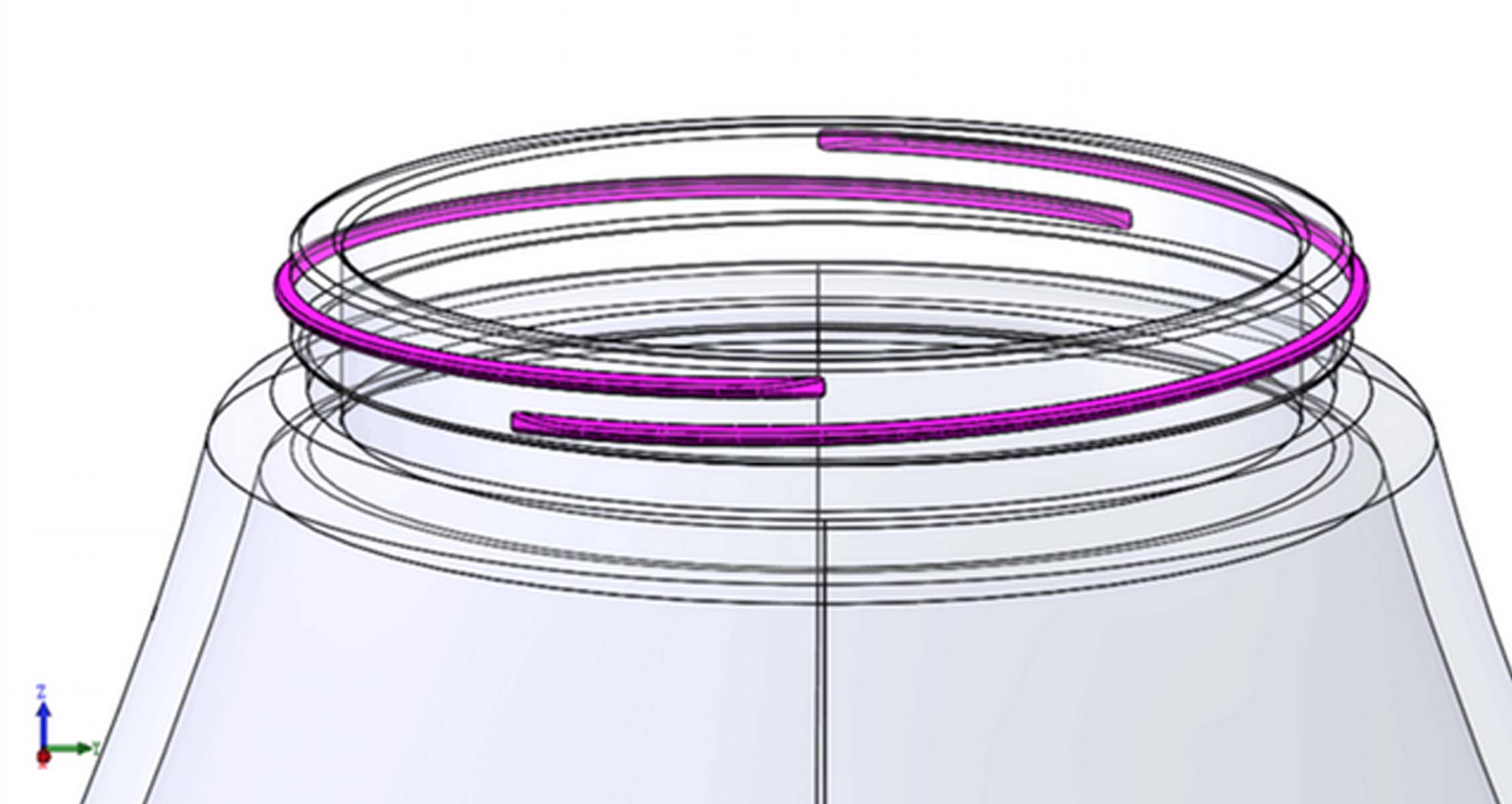 When the initial responses started to come in, it was neck and neck. We thought it may be a tie! In the end numbers pulled away and the reasoning for it is clear. Numbers provide better functionality and communication over dots.

We are preparing several different renderings with font options to find numbers that are aesthetically pleasing. The only debate remaining now is should 1 be the finest setting or the coarsest?

Measurement Marks Are a Go - Possible Alternative to Screen Printing

Only the most die hard coffee crafters bring a scale camping in the great outdoors. So it makes sense to incorporate a measurement system that can approximate the amount of beans you need for your wilderness brew. Even with the variations in bean density, measurement marks will get you closer than eye balling.

Our initial proposal was to screen print the marks onto the side of the hopper in white ink but a new suggestion was proposed by a member of Team Handground in the additional comments section of the last survey. The idea is to etch the measurement marks as rings on the vertical axle inside the hopper.

This could be less intrusive to the overall design than screen printing and prove to be more durable over the long term. We will introduce renderings of both options in the next survey.

Our original goal was to make the knob of the grinder from coffee wood. We found a source for the wood in Costa Rica but after making the first prototype knob we learned that coffee wood needs to undergo a kiln drying process before being worked with. If moisture is not removed from the wood before shaping it, it will split and crack.

We are now gathering samples from suppliers that will match the look of the dark knob shown on the prototype on Kickstarter. We are producing prototype knobs from the top alternatives and will share them with you once they are finished.

During the Kickstarter campaign the question was raised if Handground could be made from die cast metal instead of plastic. Platform88 helped us perform an analysis to determine if die casting is a feasible option. We found that die casting would increase the cost of those components by 300%.

At this cost we would not be able to meet our initial goal for Handground to achieve a consistent grind for an affordable price compared to electric burr grinders.

This means that we will stick with our original plan to electroplate the ABS plastic parts. The image above shows an example of what the "nickel" finish on the grinder will look like with electroplated ABS plastic.

The arm/handle on the grinder will undergo the most stress so we decided to invest in producing the handle from die cast aluminum. This will ensure that the handle can withstand grinding the lightest of roasts or being tossed in a bag for travel.

When we launched Handground on Kickstarter we were operating under the assumption that borosilicate glass was anti-static and soda lime glass was not. Since working with our manufacture we have learned that this is not the case. The static properties of both types of glass are the same and the production capabilities of soda lime glass are favorable.

We also made an improvement to the thread pattern which will require fewer rotations to attach and remove the glass catcher. The original thread pattern required 3 full revolutions which seemed a bit excessive in our testing.

We've introduced a new thread pattern which only requires 1.5 revolutions and it has 2 entrance points so the maximum rotation for the threads to catch is 180 degrees.

The bamboo filter rack is now functioning great with the new Aeropress filter slot. Joaquin prepared the renderings above with some proposals for laser engraving the Handground logo on the filter rack.

The next survey to Team Handground will have a vote to determine which options we produce.

We're as eager as you to move into tooling phase and begin manufacturing. However we think that putting in extra time and energy right now to ensure Handground is capable of grinding thousands of cups of coffee will be worth it in the long run.

In our nature of providing full transparency, here is a look at the challenges we are working through in the production of the latest prototype.

We are working towards the 20 different coarseness levels as planned, but the engineering team has concerns that the steps may be too close together which could cause the adjustment mechanism to slip.

The other concern with making the steps too close to each other is that the size of the ridge which separates each step must be reduced. If the ridge is made too small it could wear down over time as the stepper mechanism rides over the steps.

We are combating this problem by making the steps and stepper mechanism from POM which is commonly used in high performance engineering components and known for its high strength, hardness and rigidity.

The miter gears in the top cap establish a vital connection between the cranking motion of the handle and the vertical axle that drives the burr mill. Therefor it is extremely important that they are engineered in a way that keeps both gears held within tight tolerances.

In our last prototype the gears started to show signs of wear far too early. The problem came from the "clam shell" design of the top cap which relied on the two pieces the top cap is made from to hold the horizontal axle stable.

We have redesigned the gear box which supports the horizontal axle so that it is one solid piece. In addition we are testing an alloy for the gears that is stronger than brass and we added metal bearings to support the axle. The combination of these improvements should prevent any movement from happening and keep the gears perfectly aligned for years of bean crushing.

If you have experience with other hand grinders you may know this problem first hand. When you remove the inner burr mill for cleaning and then replace it onto the axle, it often ends up a little crooked. It can be frustrating to take several attempts to screw it on so that it is perfectly level.

We developed a method to solve this problem by introducing a beveled edge onto the top of the thumb nut (shown in white) and on a supporting piece (small red piece) underneath the burr mill. This will force the burr to auto center itself as you screw the thumb nut down.

Next Prototype Production is Underway

The components of the latest prototype are in production now and we expect to have them in our hands for testing by the end of May. We will be in Shanghai with Platform88 to review the prototype and quickly implement any final changes before we begin tooling.